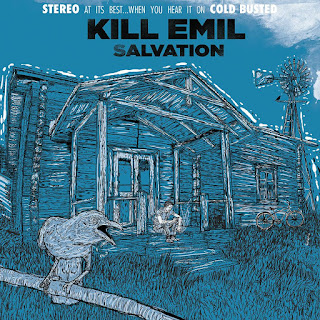 SALVATION is the 4th official album by Kill Emil released on Cold Busted available in Digital/Compact Disk and Vinyl format.

Kill Emil is a DJ and producer based in Athens, Greece – by way of Brazil – who, since 2009, has created a healthy discography of potent beats and sublime atmospheres.
With an early inspiration in hip hop and, importantly, Gangstarr’s Daily Operation, Kill Emil has been prolifically chopping up breaks on his MPC and is now up to his third artist album, the intriguingly titled Salvation.
Its twelve tracks introduce dense soundscapes and clever samples over rough, funky rhythms, providing fuel to the DJs and head-nodders alike.
Highlights on this Cold Busted release include the bouncy and somewhat spacey “When I See Your Smile”, the wistful yet playful “Can’t Find It”, and the surprisingly cosmic “Such A Long Time”.
Kill Emil’s constructions contain many twists and turns within the layers … this imaginative producer keeps things interesting for the full run of his captivating album.
Expand your mind and find Salvation.
Here is the official video of the first single "When I See Your Smile"
https://www.youtube.com/watch?v=S00RcF3pgzg

Diskocutz The Album by Timewarp